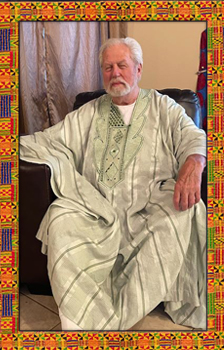 In 1995 he traveled to Ode Remo and asked Araba Adesanya Awoyade if he could formally study with Awo Fatunmise. Permission was granted. At that point he was given elekes into the Fatunmise family in Ile Ife and was initiated into Ogun by the Fatunmise family.  As a result of his training with Awo Fatunmise, Awo Falokun was given permission to do Orisa initiations. In 2005 he received Odu pot from Awo Dare from the lineage of Ile Ife and was given permission to do Ifa initiations.

With this history and a lifetime of incredible experiences, Awo Falokun has been a prolific author of books and online materials pertaining to Ifa and how to incorporate spirituality, family, and life balance according to African Example. He regularly travels the world training students in the concepts he's learned. Details, his itinerary, and contact information to schedule a training or initiation may be found later on this site.

This site is set up as a resource for accessing books by Awo Falokun Fatunmbi. These books cover a number of different topics related to African science and metaphysics, the sacred technology of traditional Yoruba Ifa ritual, alternative history, and a number of fictional accounts of real events described from a non-conforming point of view.

Check Out The Books On This Site